Train are seemingly unstoppable! The pop rock superstars have been entertaining audiences for over twenty years and with their Picasso at the Wheel Tour, they show no signs of slowing down! The tour marks the release of their recent hit album Bulletproof Picasso. With special guests The Fray & Matt Nathanson, it looks to be a pretty special show, and fans should watch out for the "Patcast Tailgate Tent" for all sorts of goodies! Catch it all at DTE Energy Music Theatre on Wednesday 1st July! 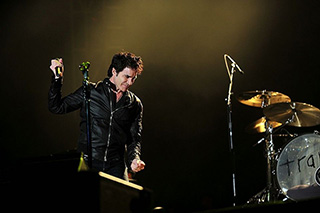 Train broke though commercially with the release of their acclaimed 1998 eponymous debut album, and have been wowing audiences ever since. Renowned for their double Grammy Award winning single “Drops Of Jupiter”, they have sold over 10 million albums and 30 million tracks worldwide (including the RIAA 6x Platinum-certified international hit "Hey, Soul Sister"), and with the release of their seventh studio album Bulletproof Picasso, Train cement their place as beloved stars of American rock.

The Fray achieved international fame with their 2005 double platinum album How To Save A Life. Their single of the same name tied for the seventh longest charting single of all time on the Hot 100 chart, with Santana's "Smooth", at 58 consecutive weeks. With four studio albums under their belt, The Fray continue to take piano-driven pop rock to another level.