Matchbox Twenty have been working on a brand new, 50-date tour (their first since 2017's co-headlining trek with Counting Crows), and they're excited to be coming to DTE Energy Music Theatre on Tuesday 14th June 2022 (Rescheduled from Sunday 29th August 2021)! Despite a number of shake-ups over the years, the band are stronger than ever and love performing together, relying on their solid back catalog of hits to give fans a good time:

"We're working on some new songs, but I don't see the landscape in the world being one that makes sense for us to make an entire album right now. We're going out on an anniversary tour for ("Mad Season") and there's a huge amount of nostalgia that comes with that. There's 20 years of music that people are going to want to listen to. So for us to just start shoving a whole bunch of brand new songs down people's throats, I don't think they're going to love that. But if we came out with one or two songs that we legitimately got behind and we felt really good about, then those fans that really want to hear something new won't walk away disappointed either," said frontman Rob Thomas in an interview.

They'll be joined by LA-based alt-rockers The Wallflowers in support! 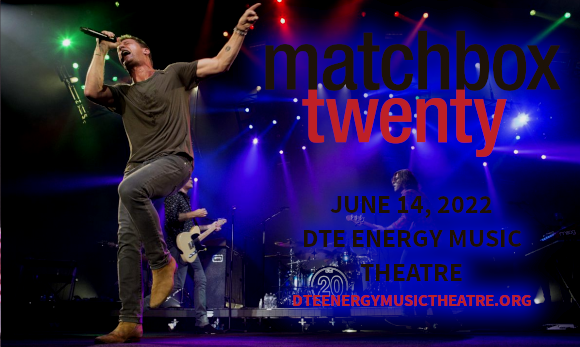 Bursting onto the charts with the top 40 singles “Real World,” “Back 2 Good” and the chart-topping hits “Push” and “3AM,” alt-rock band Matchbox Twenty made their debut in 1996 with the diamond-certified album Yourself or Someone Like You. As a follow-up the band released the four-times Platinum Mad Season in 2000, which launched the number one singles “Bent” and “If You’re Gone.” More Than You Think You Are, their third release, was also certified platinum and spawned the number one hit, “Unwell.” A greatest hits compilation album came in 2007, gifting fans six new songs. The album, Exile On Mainstream, charted yet another chart-topping track, “How Far We’ve Come.” Matchbox Twenty's most recent album, 2012’s “North,” debuted at number one on the Billboard 200 – a first for the Orlando band.