Kiss: The End Is Near... Tickets

KISS The End Is Near… The final Kiss concert on the "End of the Road World Tour." It’s finally here, Kiss have reached the end of the road, you do not want to miss this, One last Tour, one last show, one last chance to catch this legendary band live. Buy your tickets for Kiss at DTE Energy Music Theatre on Wednesday 1st September 2021 or forever feel like you missed your final chance. Come and be a part of this final show, Kisstory will be made. 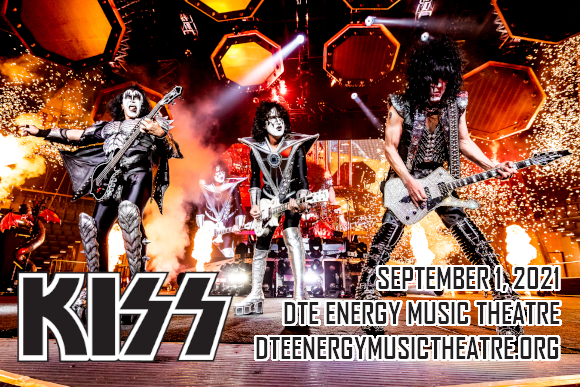 Kiss is an American rock band formed in New York City in January 1973 by Paul Stanley playing rhythm guitar, Gene Simmons playing bass, Peter Criss on drums, and Ace Frehley on lead guitar. The band has gone through several lineup changes, with Stanley and Simmons the only remaining original members. The current members are Paul Stanley, Gene Simmons, Eric Singer on drums and Tommy Thayer playing lead guitar. Well known for its members' face paint and stage outfits, the group rose to prominence in the mid-to-late 1970s with their elaborate live performances, which featured fire breathing, blood-spitting, smoking guitars, shooting rockets, levitating drum kits, and pyrotechnics.
Kiss is one of the best-selling bands of all time, having sold more than 75 million records worldwide, including twenty-five million RIAA-certified albums. Kiss also holds the title as America's number one Gold record award-winning group of all time, having earned thirty Gold albums. Kiss has fourteen Platinum albums, with three albums being multi-Platinum. On April 10, 2014, the four original members of Kiss were inducted into the Rock and Roll Hall of Fame. Kiss was ranked by MTV as the ninth "Greatest Metal Band of All Time", and placed tenth on VH1's "100 Greatest Artists of Hard Rock" list, as well as being ranked as the third "Best Metal and Hard Rock Live Band of All Time" by Loudwire.