Two huge forces of rock music collide as Sammy Hagar and the Circle & Whitesnake bring their mighty co-headliner tour to DTE Energy Music Theatre on Tuesday 11th August 2020! These mighty bands are not only peers in the rock world, but they're also friends, and they'll each be bringing a full headline set of rock hits to the stage, with Night Ranger providing support!

“The Red Rocker and the Snake??? OMG … I wanna see that show myself!!!” Said Whitesnake frontman David Coverdale. “I’m a big fan of Sammy Hagar, Michael [Anthony], Vic [Johnson] and Jason [Bonham]. …We’re gonna have a blast together!! See y'all there, people!!!” 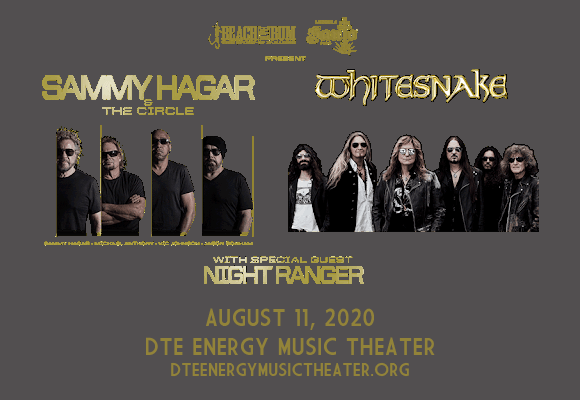 When it comes to having a rock pedigree, it does get much better than British-American supergroup Sammy Hagar and the Circle! Frontman Hagar and bassist Michael Anthony both spent a significant numer of years as members of Van Halen, lead guitarist Vic Johnson is a member of rock 'n' roll band The BusBoys (and has also played with Hagar as part of Sammy Hagar & The Waboritas), and drummer Jason Bonham is a member of rock royalty as son of the late, great Led Zeppelin drummer John Bonham, as well as a rock star in his own right! The band was brought together by Hagar in 2014 and plays a variety of covers from Montrose, Van Halen, Chickenfoot, and Led Zeppelin. In 2019, the group released its debut studio album, Space Between, which went in at number four on the Billboard 200, and hit the top spot on the Billboard Top Album Sales, Independent Albums and Top Rock Albums charts.