Riff Fest is coming to DTE Energy Music Theatre on Saturday 18th July 2020! Get ready for a night of the heaviest music in your faces, as an epic line-up of killer bands come together for this larger-than-life show!

“101 WRIF is excited to present ‘RIFF FEST’ 2020 for a great evening of rock performances across two stages at DTE Energy Music Theatre. We are ecstatic to have this year’s ‘RIFF FEST’ headlined by Rob Zombie along with other amazing support from Halestorm, Beartooth, The Blue Stones, Escape the Fate, Joyous Wolf, The Black Moods and South of Eden. We can’t wait for summer to get here so we can enjoy this full day of rock with our listeners and rock fans at ‘RIFF FEST’ on July 18.” 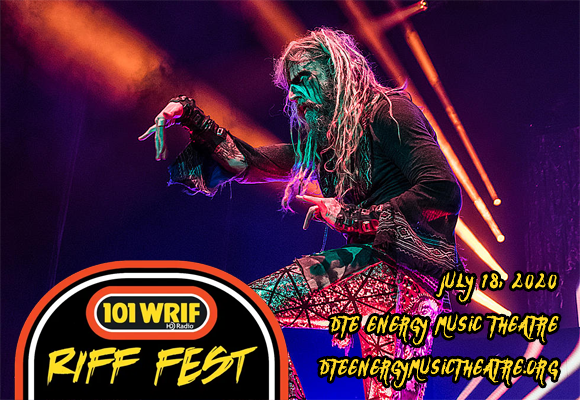 Throughout the late-1980s and 1990s, Rob Zombie began his music career as the frontman and co-founder of heavy metal group White Zombie, who released four studio albums together before disbanding in 1998 and were known for the singles "Thunder Kiss '65", "Black Sunshine" and "More Human than Human". Zombie's debut effort as a solo aritst was 1996's "Hands of Death (Burn Baby Burn)", which he wrote and performed with Alice Cooper, and which went on to receive a nomination for Best Metal Performance at the 39th Annual Grammy Awards. He released his debut solo album, Hellbilly Deluxe, in 1998 and the album hit the top five of the Billboard 200 and sold over three million copies in the United States. All six of the studio albums that Zombie has released over the years have reached the top 10 of the Billboard 200, including his most recent release – The Electric Warlock Acid Witch Satanic Orgy Celebration Dispenser (2016). In addition to his music career, Zombie is a film actor, writer, producer and director, and is best-known for his 2007 remake of Halloween.