You heard right!! It’s time for another epic Poison and Cheap Trick North American tour!! Get ready for the Nothin’ But A Good Time Tour 2018 – featuring all the smash hits from the 80s!!! coming to DTE Energy Music Theatre on Friday 8th June 2018!! Get your tickets now – all purchases from this site are entirely free of service fees and shipping charges. 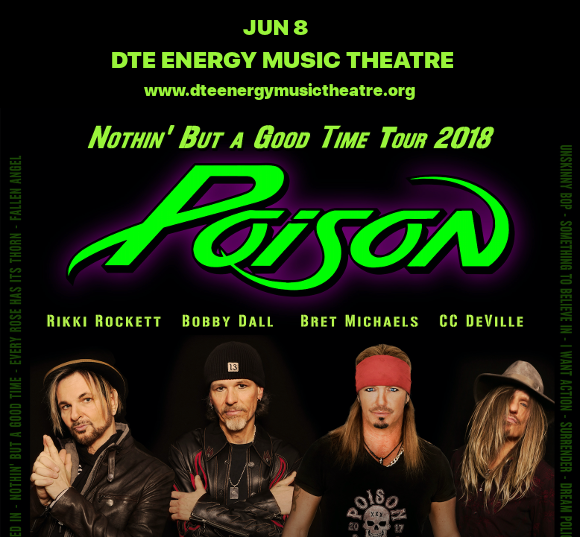 One of the leading forces of the glam metal genre in the 80s, Poison saw most of their success in the 80s and early 90s. Re-forming with the original lineup in 1999, Poison performed a greatest hits tour and continued to release long-awaited new albums, including “Crack a Smile… and More!”, “Power to the People” and “Hollyweird”. Most recently, they released a greatest hits compilation, entitled “The Best of Poison: 20 Years of Rock,” returning them to a well-earned place in the Billboard top 20 charts!!

“The all original Poison is headlining again this summer. It’s going to be a mega concert and party combined,” said frontman Brett Michaels. “We will be playing all the hits and bringing high energy rock and roll good times. I promise this will be awesome…My friends Cheap Trick and Pop Evil will be joining us as well as some special guests on select dates. Again, I know all the bands with all the hits will be giving 1000 percent!!!”

We can hardly wait for it – can you?? No?? Then grab those tickets NOW, while you still can!!