Got the moves like Jagger? Save it for the big day as Maroon 5 & Meghan Trainor will get everyone on party mode at the DTE Energy Music Theatre on Monday 23rd August 2021. 2021 will be a banner year for Maroon 5, vocalist Adam Levine takes off his 'judge' hat and puts on his pop superstar hat for the much-awaited tour de force of Maroon5. Sharing the stage with them is the equally accomplished pop sweetheart Meghan Trainor. You've gotta put those Jagger moves to good use. Just make sure to book your tickets a.s.a.p. ! 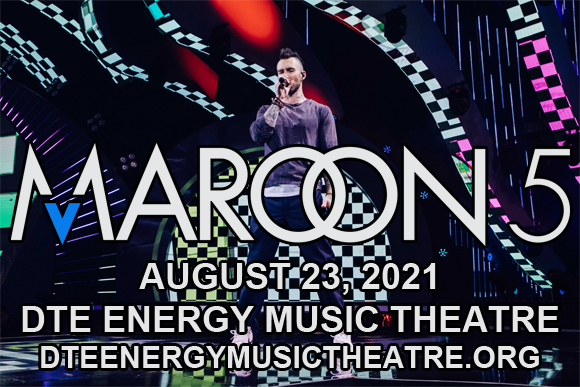 One of the most recognizable band names on this planet today is Maroon 5. At the turn of the new millennium, Maroon 5 started building their fandom, one successful single after another. Their stunning debut album "Songs About Jane" initially unleashed the powerhou single "Harder to Breathe", which set the airplay and Billboard chart wheels into motion, making it to the Top 20 on the Billboard Hot 100 singles charts. The album peaked at No. 6 on the Billboard 200 in September 2004, 26 months after its release; this was the longest period between an album's release and its initial Top 10 appearance. Then the hits kept coming, non-stop –"She Will Be Loved", "This Love", "Sunday Morning", propelled the album to selling over 10 million copies. From there, Maroon 5 was on everyone's lips. And they sealed the deal before critics and bashers as Maroon 5 bagged the Grammy Award for Best New Artist in 2005. The hits just kept coming. "Makes Me Wonder", "Moves like Jagger", "One More Night", to name a few, put them in a place only reserved for those hailed and worthy to be called superstars.

It's been almost two decades the the color of Maroon 5's success has never faded. As of late, they continue to make a crack at the charts with monster hit singles like "Payphone", "Sugar" and "Girls Like You". With their sales of hitting 120 million records, Maroon 5 is up there in the ranks of the world's best-selling music artists

There's is no other way to beat FOMO. Take the first step — book your tickets now!