Hip-hop heads, there’s only one place to be on Saturday 30th June 2018!! That’s right, LOGIC is coming to the DTE Energy Music Theatre with special support from up-and-coming new artists NF and Kyle!! It’s going to be epic – tickets on sale now and selling out fast!! Don’t delay in getting yours!! 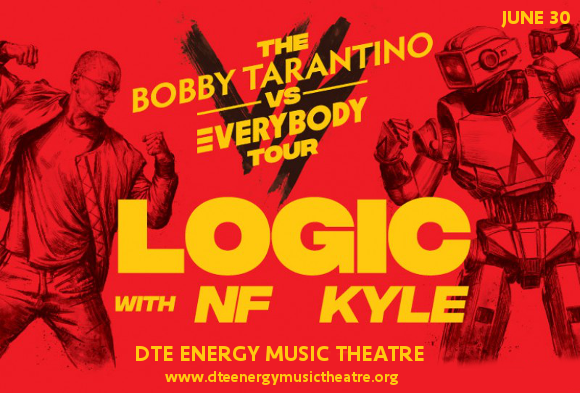 Dubbed “The Bobby Tarantino VS. Everybody Tour,” after his most recent mixtape, “Bobby Tarantino II,” the huge tour kicks off on June 8th in Boston, finishing up August 3rd in St. Louis, Missouri, hitting all the major cities in the US including the most iconic venues along the way!! The tour announcement comes in the wake of his huge success with the song “1-800-273-8255,” featuring Alessia Cara and Khalid. Thematically focused on suicide preventation, the song blew up across the world, receiving two Grammy nominations including the prestigious award for Song Of The Year, in addition to achieving Platinum certification from the RIAA – FOUR times!!

“Bobby Tarantino II,” featuring guest appearances from 2 Chainz, Wiz Khalifa, and Big Sean, was released on March 9th and as expected, topped the Billboard 200 in its first week of release, making it Logic’s second number-1 album after “Everybody”.

Get ready to experience all the hit songs from the new album live – grab your tickets to see Logic, NF and Kyle NOW while they last!!