Back for another year the award winning trio Lady Antebellum is set to perform their brand new tour live at the DTE Energy Music Theatre on Friday 19th June! After a hugely successful album release in early 2014, they are back with the 'Wheels Up 2015 Tour, supporting the album '747' which included the smash hit song 'Bartender'. Hunter Hayes & Sam Hunt will also join the shows as they juggle supporting performances. "I'm excited to finally get back on the road," says Hayes. "And I'm excited to team up with Lady A — fantastic performers, unbelievable shows that they put on… The energy is going to be through the roof." Grab your tickets now! 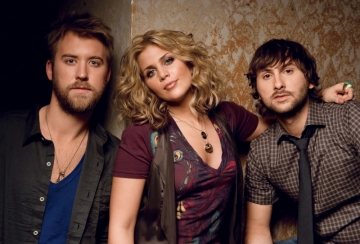 The group first made a guest appearance on Jim Brickman’s single “Never Alone”. Just after, they were signed to Capitol Records and released the song “Love Don’t Live Here” which got to No.3 on the Hot Country Songs chart in May 2008. Their self titled first album reached platinum status and included the songs “Lookin’ for a Good Time”, which reached No.1, and “I Run to You”.