Kidz Bop Live comes to DTE Energy Music Theatre on Saturday 28th August 2021! The perfect choice for your child's first concert, Kidz Bop Live gives kids the chance to sing and dance along to all their favorite radio hits, re-styled to be age-appropriate, but without losing any of the magic that makes the original songs great! This year's team of Kidz Bop Kids includes Ashton, Mandy, Max, Mia, Miller and Twinkle, and they'll be performing a brand new show, taking all the best radio tunes from the last few years and putting their own spin on them, creating a party atmosphere that will give everybody the chance to boogie! 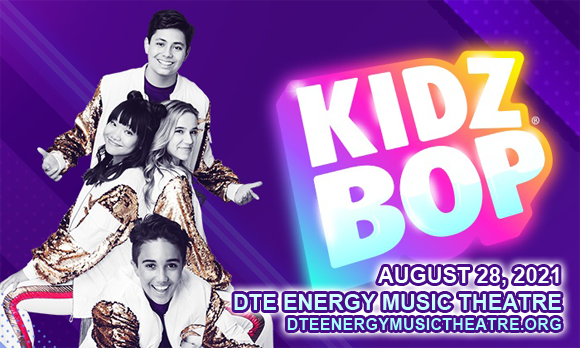 In 2001, Razor & Tie co-founders Cliff Chenfeld and Craig Balsam decided to gather together a group of talented pre-teen singers to re-record the biggest chart hits of the time in an age-approprite way, to make a record that was by kids, for kids. This soon became the game-changing global phenomenon that is Kidz Bop! The Kidz Bop Kids were Billboard's No. 1 Kids' Album Artist of 2010, 2011, 2012, 2013, 2014, 2015, 2016 and 2017, and to date, Kidz Bop has sold over 17 million albums! Not only that, but Kidz Bop has grown to include merchandise, music videos, a live touring division, and talent search competitions, and has become a true worlwide sensation!