Hip hop fans, get ready for the show of the year! The incredible Kendrick Lamar is on his way to the DTE Energy Music Theatre on Wednesday 13th June 2018 on his “Damn!” tour with his latest album. What’s more, he’s teaming up with the amazing SZA and Schoolboy Q for the journey. Tickets are bound to sell out fast, so don’t delay, get your tickets NOW!! 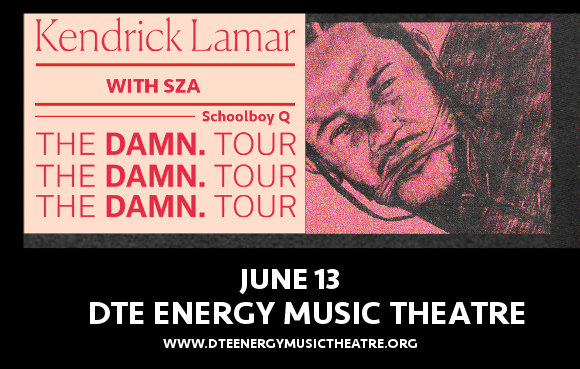 With his first release, “Overly Dedicated,” in 2010, Kendrick Lamar began to gain international recognition. His first studio album, “Section.80” released independently just one year later, by which time he had collaborated with major hip hop artists including Snoop Dog, The Game, and Busta Rhymes. His third album won him critical acclaim the world over in addition to a Grammy Award for the single “i”. Today, he is widely regarded as one of the top songwriters in the hip-hop world!

Kendrick Lamar’s new album is a more introverted and spiritual one, a departure from his Grammy Award-winning, chart-topping “To Pimp A Butterfly”. “We’re in a time where we exclude one major component out of this whole thing called life: God,” Lamar said, regarding the themes behind “Damn!” “Nobody speaks on it because it's almost in conflict with what's going on in the world when you talk about politics and government and the system.”

Are you excited to hear all the new songs live?? Get your tickets to see Kendrick Lamar, SZA, and Schoolboy Q NOW, before they sell out!