Oh how sweet it is to be serenaded by one of the most heartwarming voices of folk-pop-rock music! Nobody sings acoustic love songs better than sweet baby James, himself — James Taylor. He is an icon in the true sense of the word who has not rested on his laurels. He is still tirelessly touring and bringing his music across country roads in many parts of the world to this day. Indeed, James Taylor & with a little help from his legendary friend, Jackson Browne, are bound to hit center stage at the DTE Energy Music Theatre on Saturday 13th June 2020. As you are flashing your smiling face right now, be quick to click on that 'get tickets' link on this site, to gear up for that James Taylor concert experience. Don't miss it! 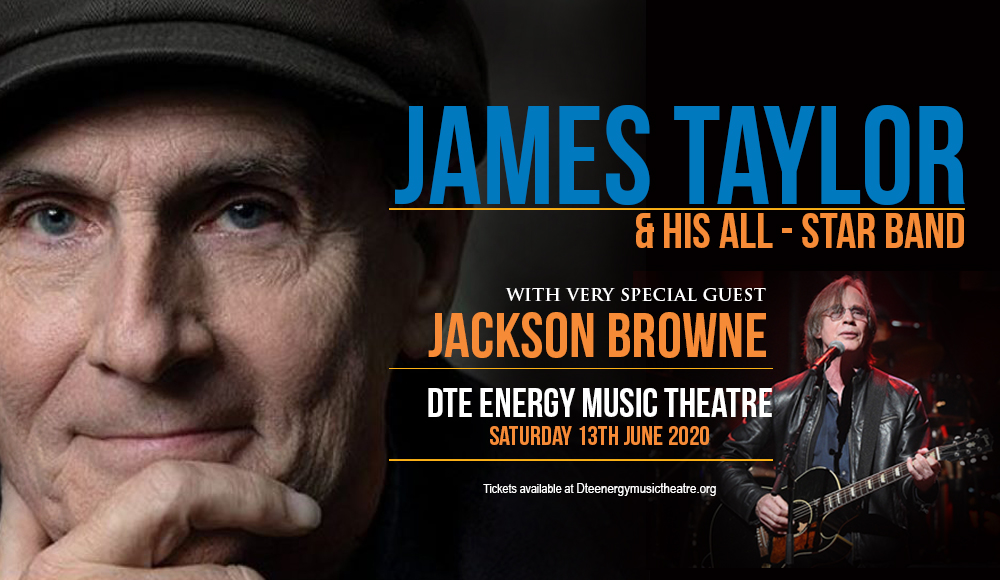 James Taylor has a treasure trove of hits that mark his artistic triumphs. "Fire and Rain," "Country Road," "Something in The Way She Moves," "Mexico," "Shower The People," "Your Smiling Face," "Carolina In My Mind," "Sweet Baby James," "Don't Let Me Be Lonely Tonight," "You Can Close Your Eyes," "Walking Man," "Never Die Young," "Shed A Little Light," "Copperline" and many more… And as if these were not enough, James Taylor continues to make music, this time, breathing new life to timeless songs from throughout the 20th century. "American Standard" is his latest album that will give a fresh perspective on classics like Oklahoma!'s "The Surrey With the Fringe on Top," Bing Crosby's "Pennies From Heaven," Audrey Hepburn's "Moon River" and many more.

“I’ve always had songs I grew up with that I remember really well, that were part of the family record collection – and I had a sense of how to approach, so it was a natural to put American Standard together,” Taylor said in a press statement. “I know most of these songs from the original cast recordings of the famous Rodgers and Hammerstein musicals, including My Fair Lady, Oklahoma, Carousel, Showboat and others.”

“In terms of how they were performed and recorded before, we paid attention to the chords and melody, but we were interested in doing something new, and in bringing something new to it, we’ve reinterpreted the songs, that’s what makes it worth doing.”

James Taylor had his career breakthrough in 1970 with the No. 3 single "Fire and Rain" and had his first No. 1 hit in 1971 with his recording of "You've Got a Friend". In 1976 his "Greatest Hits" album was certified Diamond and has sold 12 million US copies. He is lauded as one of the best-selling music artists of all time, having sold more than 100 million records worldwide. Taylor is a five-time Grammy Award recipient and has been inducted into the Rock and Roll Hall of Fame in the year 2000.