After a year of waiting in anticipation, it's all paid off as the recently announced tour is here! That's right the all time favorite Dave Matthews Band is back on the road for Summer 2018 and you can get ready by booking your tickets! Dave Matthews Band will be taking to the stage at DTE Energy Music Theatre on Wednesday 6th June 2018. A night of sensational music – you'd be crazy to miss out on this one! 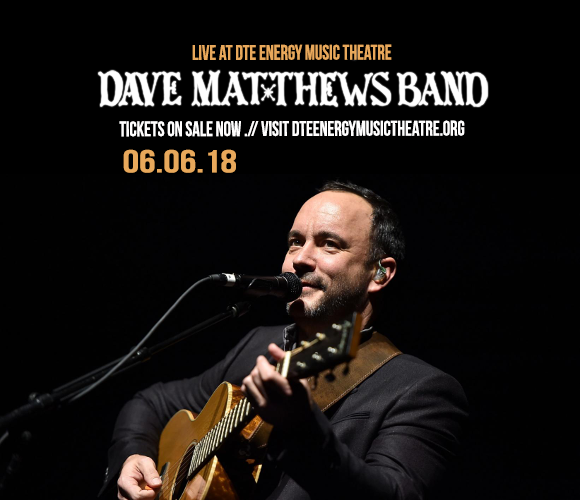 As the main man and singer-songwriter / guitarist you have of course – Dave Matthews, along side him bassist Stefan Lessard, drummer and backing vocalist Carter Beauford, and saxophonist LeRoi Moore. Boyd Tinsley joined the band as a violinist soon after the band was formed.
To this day DMB have a few line up changes, some of their previous members have included; keyboardists Peter Griesar and Butch Taylor.

Through the years they have released several albums including the 2009 Big Whiskey & the GrooGrux King shot to the number one position on the Billboard 200 and marked their fifth record to get to the number 1 status – a triumph and a place in the charts that isn't alien to Dave Matthews Band, six studio albums in a row have hit the big time and even knocked the great Metallica off from the first position in 2016.

Now in 2018 they are still one of the biggest acts on the live music scene and are one that fans will choose time and time again to see perform as they are full of talent, great songwriting and in each concert play their songs slightly different so no two shows are the same. All of this and more ticks all the boxes and without a doubt Dave Matthews Band should be on your must see list for this year!