Feels like somebody just turned on the summer heat? That's the effect of two iconic musical forces coming together in one concert stage for a truly explosive summer tour de force! Chicago – The Band & Rick Springfield is bound to hit the DTE Energy Music Theatre on Sunday 25th July 2021. As the official word dropped, fans were shookt! The magnitude of two rock n' roll giants is mind-blowing indeed. Chicago's jazz-easy-listening rock and Rick Springfield's turbo-charged pop-rock ditties, are reasons enough to send fans into a mad scramble for tickets. But stay where you are, because you can get yours without leaving your seat. Start clicking that 'buy tickets' link on this website to save your seat and lock-in your tickets now! 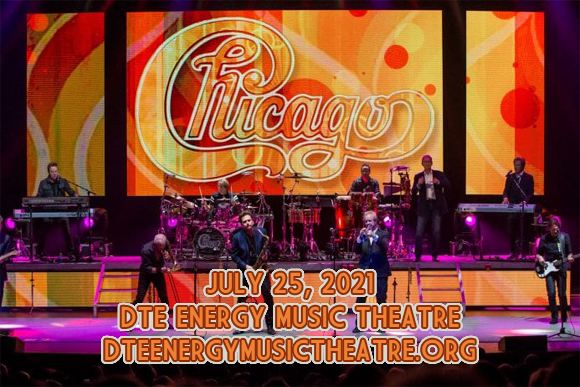 Chicago brought us into a unique musical journey as a “rock and roll band with horns”, blending elements of classical music, jazz, R&B, and pop music. They started in 1969 and brought on the sleeper hits like "Does Anybody Really Know What Time It Is?," "Saturday in the Park," "Make Me Smile", "Colour My World" and "Wishing You Were Here". Their steady stream of hits also ushered in an evolution in their sound which gradually transitioned into a soft rock-pop rock sound which exploded on the charts. With Top 40 hits like "Hard to Say I'm Sorry/Get Away", "Hard Habit to Break","Will You Still Love Me?", among others, Chicago cemented their slaying and their staying power. They hold the record as one of the longest-running and most successful rock groups, and one of the world's best-selling groups of all time, having sold more than 100 million records. Chicago has 23 gold, 18 platinum, and eight multi-platinum albums to their name. As they were inducted into the Rock and Roll Hall of Fame in 2016, Chicago still stands as the ultimate destination for fans to get their fix of jazz-flavored easy-listening rock.

Rick Springfield has that lethal package made up of heartthrob charm and rockstar swagger. He made pop-rock music sound and look so good. This rock and roll hero was also making waves on the TV screen as the beloved Dr. Noah Drake on the daytime drama General Hospital, and still star and portray pivotal roles in various TV series and shows to this day. As his unbroken string of monster hits came along, his music career zoomed-up to unprecedented heights. "Jessie's Girl", "Don't Talk to Strangers", "Affair of the Heart", "Love Somebody"… were just some of Springfields hits that filled the airwaves to no end. He proved that he is a legit force in rock and roll as he was awarded with a Grammy for Best Male Rock Vocal Performance in 1981.

Rock and reminisce with Chicago – The Band & Rick Springfield. Save the date and lock-in those tickets now!